The Killifish Of Nigeria
The Killifish Of Nigeria
By Stefano Valdesalici
Four Regions
The African country of Nigeria is a very rich in terms of natural resources, particularly oil. It also offers an enormous variety of aquatic biotopes with relatively spectacular fish. There are approximately four geographical/biological regions in which Nigeria can be divided. 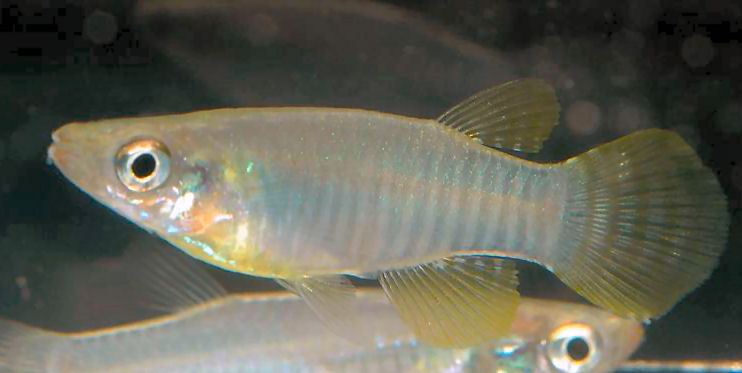 Aplocheilicthys spilauchen
Zone One
The first zone that is encountered, starting in the south, contains the lagoons and coastal streams of the Niger River delta. A killifish common to this zone is the Lampeye, Aplocheilicthys spilauchen. This is not a highly colored species, but displays well in the right lighting. It is easy to keep, adapting to soft water and every type of food, even flake foods. Eggs are deposited in aquatic plants or injected into cracks in rocks. The eggs incubate in approximately 15 days. This habitat is characterized from an extreme variability. The size and extent of the lagoons and rivers change continuously because of the tremendously high rainfall.

Zone Two
As one moves toward the north, the second zone contains the pluvial rainforest of the Niger River delta. This region is characterized by a nine-month rainy season, from March to November, with a rather dry August. This contrasts areas further north where it only rains 4 months. Given the length of the rainy season in the south, the temperature remains rather constant year round and varies from the 21 to the 35 °C, but the average is 25-26°C. Water conditions are characterized as: a pH of 4-6; conductivity is low 20-50 microSiemens (DGH 1.5). 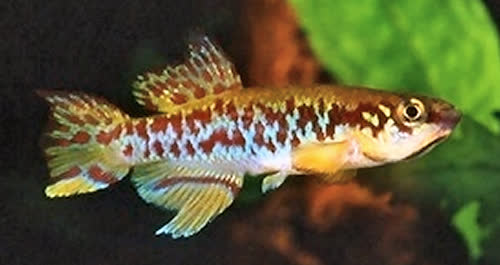 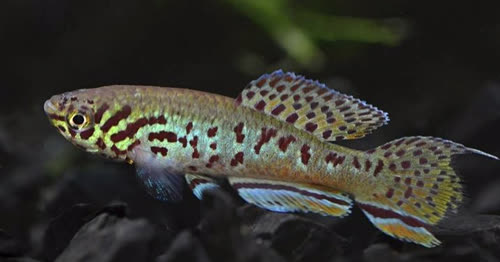 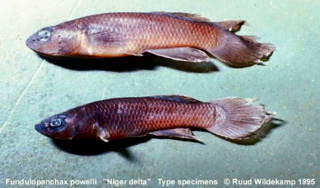 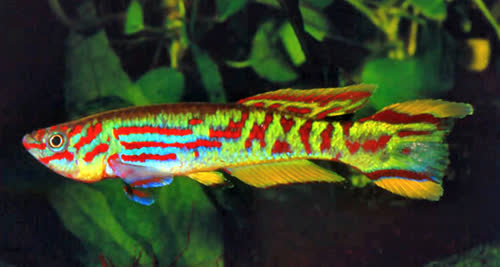 These species inhabit swamps, swampy areas of streams, or very slow moving streams. All of these habitats are subject to partial (or a total) drying out several times during the year. These fishes vary in size from about 5 to 15 cm. All are bred in a similar manner. Because these are rather aggressive species, it is recommended that you kept one male and several females of the larger species in a tank at least 50-80 liters in size; while for the smaller species smaller a 30 liter tank is probably sufficient. It is important to add many hiding places as both males and females can kill the other. Create hiding places by adding aquatic plants, fibrous peat moss, and/or spawning mops. The hardness and pH of the aquarium water should be maintained at a medium range values. Temperature over 25°C cause oxygen deprivation, so lower temperatures are recommended. The aquarium should not be highly lit. While these species prefer and do best on a diet of live foods (mosquito larvae, small fish and earthworms), they can be adapted to others such as frozen and freeze-dried fish foods. Partial changes (30% per week) are important in order to maintain optimal water quality. Oodinium (Velvet) is a disease that occasionally occurs and can be difficult to cure.

To breed these species, you can set up a small tank (3-5 liters) that has a 1-2 cm layer of peat moss on the bottom. The water should be fairly soft (0.5-0.8 DGH). Keep the male and female(s) in separate tanks for several days to condition them with quality live foods. At this time, after the water has stabilized in the breeding tank, introduce the male with one female for several hours (2-8). After this time, it is advisable to again separate the pair for several days of conditioning. With 3-4 of these reproductive cycles, it is common to find a large number of eggs have been deposited (often over a hundred). When the adults have been removed from the breeding tank, collect the peat moss, remove the excess water from the peat, and incubate in plastic bags for 4 to the 9 weeks (this depends on the species). When the eggs are ready to hatch, place the peat in a small container and add water with a temperature of 15°C and medium hardness of one. Most eggs will hatch within a few hours. As an alternative, the eggs can be incubated in water, but normally many of the eggs will fungus and some of the fry may show defects. At birth the fry are able to consume baby brine shrimp. With frequent and regular water changes, the fry will reach sexual maturity anywhere from 6 weeks to 5 months, depending upon the species (faster sjoestedti and gulare, slower arnoldi - 2 months and spoorenbergi - 5 months). The average life expectancy of these fish is approximately 9 months for the fast maturing species, and one year or longer for the slower-maturing species.

Zone three
The third region is characterized by primary and secondary forest containing small streams, ponds and swamps derived from small water sources. Here we find Aphyosemion bitaeniatum, Aphyosemion callirium (whose area of distribution extends from Togo into Cameroon), Aphyosemion bivittatum and Aphyosemion scheeli which are shown respectively, below. 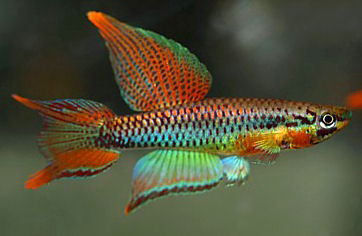 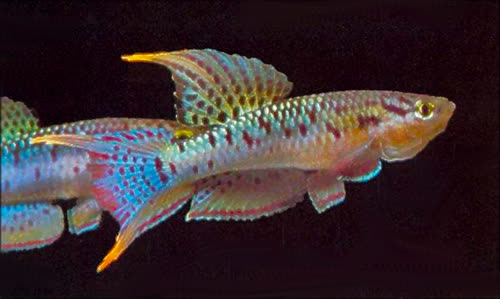 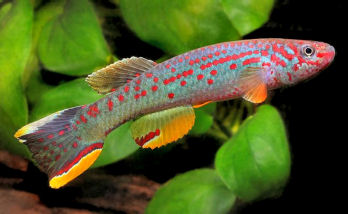 (whose dissemination is limited to the area northeast of the Niger River delta). These biotopes are characterized by the presence of usually permanent waters that are soft and slightly acidic; the color of the water varies from very opaque during the dry season to very yellow (amber) during the rainy season. The yellow color is due to the decomposition of great amounts of dead leaves that wash into the waters.

The males of the killies found in this zone are rather territorial and you will find one male approximately every meter as you move along the stream. The females move into the territory of a male when they are ready to spawn. In a small pool or pond environment, one tends to find the killies in breeding groups made up of several males, of which one is dominant, females, and juveniles. Killies feed upon terrestrial insects (mainly ants), the aquatic larvae of insects, and crustaceans. These fish tend to be rather easy to raise. They will lay their eggs on mops of synthetic wool or in peat moss. Breeding can achieved using tanks as small as 10-20 liters, because, usually these fish are not aggressive. It is, however, recommended that you add shelters for the females. These can be dense plant growths of Microsorium (Java Moss) and Vescicularia (Java Sword or Fern). These killies will deposit their eggs throughout a spawning mop, as well as in the peat moss. It is recommended that the eggs be collected and then incubated in small containers. The water in the incubation container should be similar to that of the parents, except fresh and clean. For the more difficult species, adding a disinfectant such as acriflavine or methylene blue can be helpful. Incubation averages about 15 days at a temperature of 24°C. It is important to monitor the eggs. Remove any that fungus (turn white and then appear fuzzy) and change part of the water regularly. Another breeding technique is to leave the eggs to develop in the tank with the adults. As the fry hatch, they tend to hide in floating plants near the surface where they can be scooped out and moved to a rearing container. For their first food, infusoria is necessary for the smallest fry and then baby brine shrimp. The adults will accept practically all live foods (fruit flies, mosquito larvae, daphnia, and also baby brine shrimp. When these are unavailable, these killies will adapt to frozen foods.

These killies do not inhabit the shallower areas closest to the banks, but prefer to swim where the current is stronger. All Lampeyes are schooling fish and they are often found in groups of several dozen. Spawning occurs with the eggs deposited mainly on the gravelly bottom or between cracks in rocks. In the aquarium, these fish require well-oxygenated water and a water current. Breeding and fry rearing are handled the same as for Aphyosemions; (as a spawning substrate, you can use a tight synthetic yarn mop) with the exception that you should use a rather wide aquarium with a group for at least 6 fish. A porous airstone should be provided to create a water current in the fish tank. Frequently, the newly hatched fry are very small and require infusoria as their food for the first few days.

Besides the Lampeyes, this zone contains killifish from the genus Epiplatys. These include species such as E. infrafasciatus, E. togolensis, and E. spilargyreius. Their breeding is similar to that of Aphyosemion species. 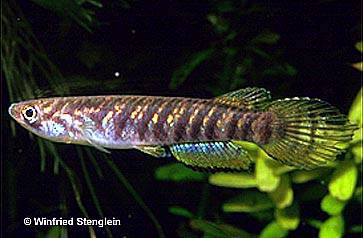 In nature, you will these species in groups that are divided in pyramidal structures with a dominant male, females, sub-adults, and juveniles. Also Epiplatys tend to prefer the sunny areas and are found close the water surface. Their diet is mainly of larger insects.

Zone Four
Practically unique to Nigeria (particularly in the zone north of the Niger river where the landscape is characterized as a savanna) we find the Fundulopanchax gardneri nigerianus. The more northernly populations have a marked tendency toward 'annual' reproduction. Many of their eggs enter into diapause (arrested development) and their incubation may require several months storage on damp peat moss. In contrast, the populations of Fundulopanchax gardneri further to the south, where the climate is much more humid, incubate in water and hatch after single 2-3 weeks. 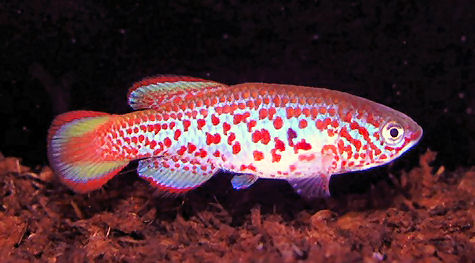 Another killifish that is found in the northeastern savanna is Nothobranchius (Pronothobranchius) kiyawensis (total length: approximately 25 mm). This is an annual species that can be maintained in tanks of 10-20 liters. The breeders lay their eggs synthetic wool mops or peat moss and those eggs require approximately a 3-month incubation in damp peat moss (identical to the procedures used with other Nothobranchius species).

As noted, the variety of biotopes is enormous. We can only wait for the political situation to stabilize before we can carry out searches for even more new species.