In the 1960's and 1970s one man's name came to mind when you said "Blue Gularis" - Paul J. Hoppe. Every year the American Killifish Association would hold a national convention and in the blue gularis class of the show Paul won every year. And rightly so, his fish were outstanding, they really were a different color than other gularis, and they were pretty much perfect fish in terms of judging. I think this is a picture of one, even if it isn't this is pretty much exactly what Paul's fish looked like. In the early 1970s three of us as kids had talked to Paul who sent us a male to work with around 1974 or so. Sadly one of the other two guys killed it by overfeeding and fouling the water, but at least I got to see one up close. This is exactly what they looked like the light blue looked like it was painted on:


They were, in my memory, a darker blue than is shown in this picture. In all the gularis I bred, I had one and only one that looked like this in 1987; Paul must have fixed this exact color.

By about the third year I'd been receiving Killi Notes from the AKA, every year was the same: 1st place, Class 7: Blue Gularis, Paul Hoppe. But, one year - and this was probably 1974 - All Mikkelsen won. And he won it again the next year. For a while All had just the most outstanding gularis around. Later, Bob Schwiegerath took over that role and later Mike Epperson; these epitomized the "large American Blue Gularis" from the early 70s to the late 80s. Al had a trick though, and published it. 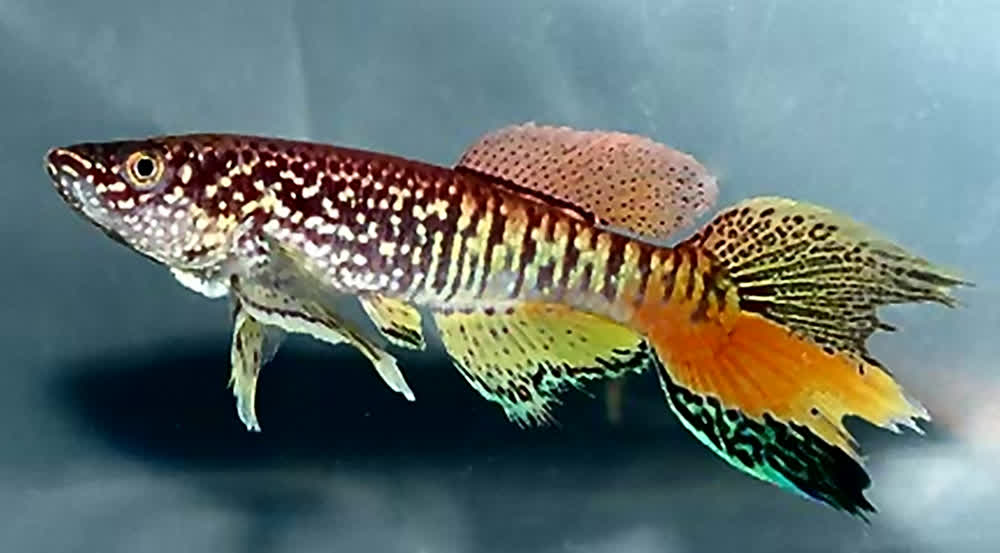 
Al Mikkelsen wrote an article "Breeding To Improve Your Killies" in Killie Notes, April 1973, p. 11. He gives an outline how to fix in a fish desirable characteristics, or to breed out undesirable ones.

The scheme is to select the best 4-5 pairs and to breed them AxB, BxC, CxD, etc. keeping strict track of their eggs.

In the next generation select the best fish from each pair and breed them with their cousins -- (AxB)x(BxC), (BxC)x(CxD), (CxD)x(DxE), (DxE)x(AxB).

So now you select the best pairs from A', B', C' and D'. You could select 2 for color and 2 for size, you don't have to choose between mutually exclusive characteristics, or you could choose all 4 for one characteristic.

Mikkelsen's original scheme is limited by tank space. There's no reason you couldn't start with 6 pair and use the same process with pairs labeled A, B, C, D, E, F instead of just A, B, C and D as the same principle applies: breed one fish with two other different ones. This would cost a 50% increase in tank space.

You could also double the genetic diversity by performing each mating twice by using reverse sexes, that is for the A' = A x B cross, you could do that twice using a male A and female B and then a male B and a female A. This would double the amount of tank resources. Essentially you'd replicate the setup in the first part and would have two sets of tanks for the offspring.

3) Breed every fish with every other fish

Mikkelson's method constrains the number of tanks nicely and is a good compromise between tank space and maximal genetic diversity. For this example, with 4 pairs you end up with 6 batches of young. What you'd do to make the next generation "fit" into 4 tanks would be to use males from A and females from A', similarly so with B. But this is for four pairs, and if you use more than that, say five or six then the number of batches of young gets high very very quickly.