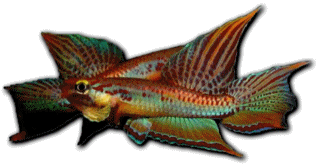 
While I think Chromaphyosemion is a very useful sub-genus, and far more explicit than the "BIV Group." I decry the recent splitter tendency to try to elevate it to a genus level without sufficient study and publications to justify it, though.

I must repectfully disagree. The work of Scheel, Amiet, Murphy & Collier and Sonnenberg all lead the same way: The BIV Group is something special and very distinct from the rest of Aphyosemion. The only thing holding it back is the rest of the Aphyosemion taxanomic mess. If you want to split Chrom. from A. then you will have to take Diapteron and Kathetys along for the ride (much to the delight of Seegers). Both these groups are basal to the the rest of the Aphyosemion phylogenetic (family) tree. If you are going to split them then the Calliurum Group must follow...

Once you begin to play the name game then you better have all your ducks in a row else we have the dreaded "Aphyposemion" problem that we had with "Cichlasoma" for a decade.

I beleive Figure 2 (from Murphy, W.J. and Collier, G.E (1999) Phylogenetic Relationships of African Killifishes in the Genera Aphyosemion and Fundulopanchax Inferred from Mitochondrial DNA Sequences Molecular Phylogenetics and Evolution 11:351–-360) is the way things are going to go.

I am told by Huber that Sonnenberg is doing the workd as we speak so keep practicing those subgenus names as in the short while you will be using them.

As a side note, very few is any of the subgenus names are new. Most are quite old. Paraphyosemion dates back to the 70s. Many of the subgenera are far better described than the actual genera. Amiet constantly raises this issue in his book: auna of Cameroon. Vol 2. Le Genus Aphyosemion Myers. (This is an excellent book by the way! well worth its salt.) Amiet also long ago put batesii in Aphyosemion, seeing alread that it is far from Fundulopanchax where it dwelled for many years.

My vote is that we continue with Chrom. as it will be raised to something distinct from the rest of Aphyosemion and Sonnenberg has already published it as a full genus name. Of course, I can't force you to accept the change. You have to judge for yourself.